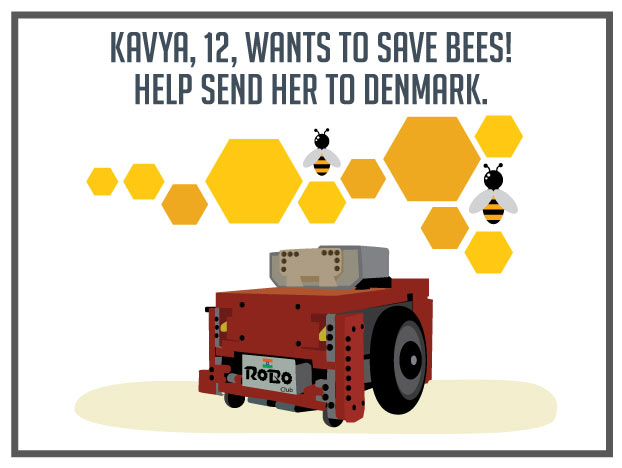 Kavya Vignesh is a 12 yr old from Delhi studying in class 7. She needs your support to help put India on the Global map in the field of Robotics. She along with her team Supercalifragilisticexpialidocious is India’s youngest ever team to qualify for the First Lego League-European Open championship in Denmark. This event is scheduled for May 2017.

I have been practising Robotics since I was 9. I have won several medals and competitions in Robotics over the past 3 years (Delhi Regional robotics championship 2015 and 2016). I am so  excited to be representing India in the forthcoming FIRST LEGO LEAGUE (FLL) – Robotics international competition, 2017 but need to raise funds to get there. Pic : This is me with my trophy.The team was so excited that the image got blurry !

ABOUT THE BEE SAVER BOT:

This was the Robot/ BOT that we built. Let me tell you more about this. I and my team have developed a bee saver bot that removes bees safely and carefully without harming them or humans.

Our solution is called the Bee Saver Bot – it’s a combination of robotics and hi-tech components. The process has 3 steps.

STEP 1 :  First, we scan the site where the beehive is.

STEP 2 : Next, we print a custom-designed enclosure which collects the hive and bees all at once.

STEP 3 :  Last, we slice the hive where it is attached to the wall of the building and transport the enclosure to the nearest bee farm for relocation.

We send up a quadcopter, like a flying drone with 3D cameras. They scan the hive and the area around it and get 3D measurements. The measurements are then fed into a CAD-CAM software which designs the shape of the enclosure which is needed to cover the hive and the bees altogether. The design is fed into a wood-based 3D printer. A fully biodegradable, breathable, and re-usable enclosure is now ready! The quadcopters go up again near the hive. 2 arms enclose the hive completely, a 3rd arm uses a sharp blade to slice off the hive right from near the wall and seal the enclosure. The enclosure is now transferred to a vehicle to be transported to the nearest bee farm.

This solution can save millions of bees from getting hurt and actually relocate them back to bee farms from where they can be back on the fields where they contribute so much to our food chain!

HOW DID WE BUILD THE BEE SAVER BOT?

Our robot is super cool. We call it the Lightning McQueen, not only because it is red in color but also because no matter how many problems it faces, it is fixed back to perfection. We tried to make it as multitasking as possible in the least amount of time. We have 6 routes in all, covering most of the missions on the game field from collecting animals, food, shark shipment, milking automation, feeding, beekeeping, etc. we have also made an optional ‘animal conservation’ mission route if there is time. There are many innovative features we have used such as pneumatics, pulley suspension, etc.

To build our robot, we have used Lego Mindstorms EV3. We are using EV3 large motors, color sensors that are used for line following, gyro sensor to take accurate turns, and pneumatics for multi-tasking. The pneumatics are just like hydraulics, they store the air in them and then use it for various tasks. Our robot consists of simple mechanisms such as Gear mechanisms, incline planes, and lever mechanisms. We did so to minimize the use of motors during the tasks. An example of one of our cool mechanisms: the Food collecting mission: we have used a Reciprocating Mechanism - The robot leaves the base and an enclosure drops which traps the animals. Then, the robot aligns with the wall, reaches the refrigerator, and the reciprocating mechanism activates, collecting food in the same enclosure!

Initially, we had weekend sessions (2-4 hrs/week), but closer to the competition we practiced 5 days a week, 18-24 hr weekly on an average. We have been learning Robotics at Roboclub for a few years now. Everyone on our team has experience using the Mindstorms EV3 and has participated in the WRO and FLL competitions before. For this animal-allies challenge, we explored a lot of new mechanisms before we actually started building our BOT.

Why we chose this cause ? Saving Honey Bees 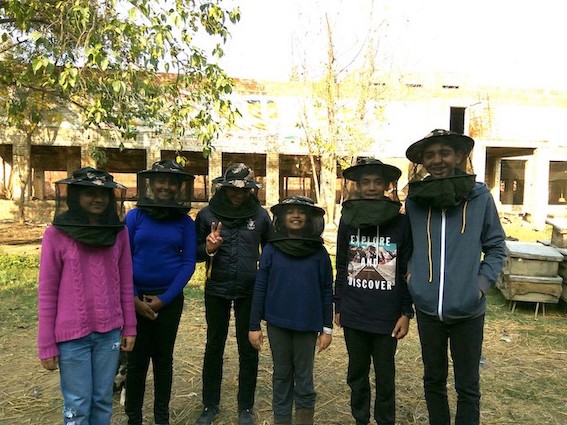 Pic : This is my team wearing protective gear as we aim to tackle the bees with our BOT.

We chose honey bees because they are mostly overlooked.

Bees are mostly killed by us humans through pesticides, colony collapse disorder, and many more ways.

We learned that more than 85% of the world’s crops are pollinated by Honey Bees. Every third bite of food comes from a bee-pollinated crop or animal that depends on bee pollination. As a part of the research, we visited a bee keeping farm and training center in the state of UTTAR PRADESH (UP) and learned all about BEES.

Whenever people see a beehive in their houses, they call the pest controls and burn the hive. That kills about 20-80 thousand bees. So we thought of building a solution that can safely relocate the beehive without harming the bees. Our solution is a BEE SAVER BOT that takes down beehives without harming any humans or bees in households and high rise buildings.

It scans the beehive and relocates it by building an enclosure that safely encloses the beehive and transports it to the nearest bee farm. We achieve our goal of saving Bees using a combination of High tech robotics and a community awareness drive.

How does our project benefit society?

Our project has numerous benefits

1) It builds awareness about the importance of Bees. Awareness is the first step towards change!

2) If bees are saved, then so are humans and the entire ecosystem.

Bees all over the world are disappearing for various reasons, but there is a lack of awareness amongst us about their importance. If we can stop bees from dying and make people aware that they are important to the ecosystem, we help society with more crop production and increased food amounts in the world. 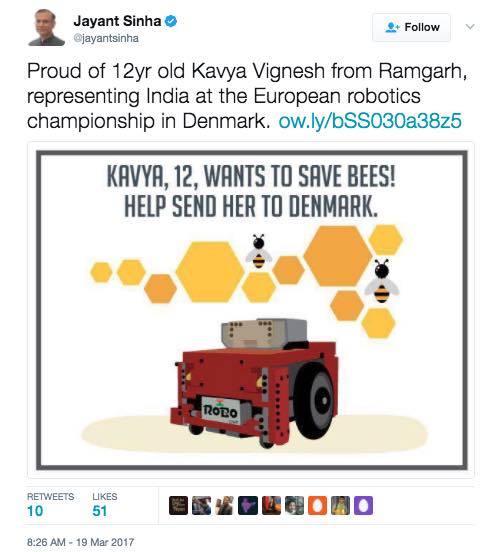 First Lego League (FLL ) is a robotics competition for children who are from 9 to 16 years of age. It encourages children from around the world to learn science and technology through robotics and compete in the global arena to showcase their knowledge and skills. Over 200,000 children from 60 countries participate every year making it one of the largest robotics events across the globe.

At the FLL India 2016-17, RoboClub Team - Supercalifragilisticexpialidocious fought off stiff competition from other older and more experienced teams. We stood in the top 8 at the India-level despite being the youngest team (all under 13 years old). The Team also won the prestigious FLL-CORE Values Award for best team-work, conceptual knowledge, scientific application, and spirit.

Team- Supercalifragilisticexpialidocious now has the opportunity to represent the Indian challenge at the FLL-EOC competition to be held in Denmark in May 2017.

FLL open championship DENMARK competition will have teams participating from 60 countries. An international audience of more than 200000 participants and visitors ensures international recognition for any brand supporting our young children who are determined to impress the judges with their uninhibited enthusiasm.

FLL introduces a scientific and real-world challenge for teams to focus and research on. The robotics part of the competition involves designing and programming LEGO Mindstorms robots to complete tasks. The students work out solutions to the various problems they are given and then meet for regional tournaments to share their knowledge, compare ideas, and display their robots. 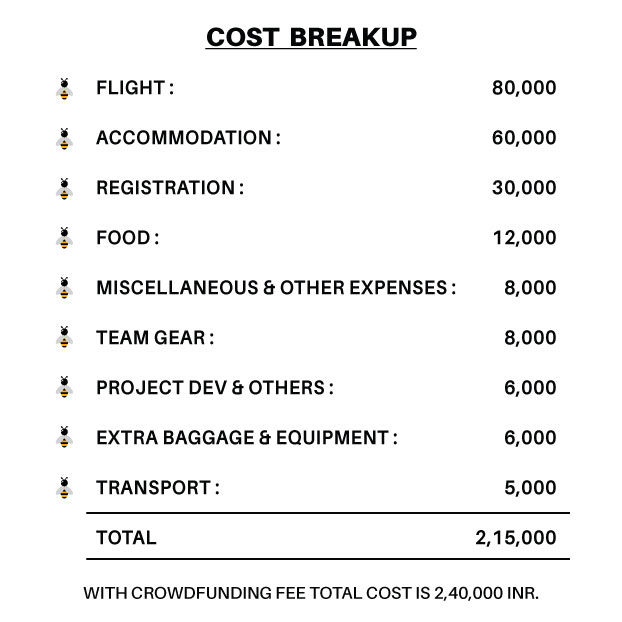 Who gets the money ?

The money collected from this campaign less the crowdfunding fees is transferred directly to the account of the Robotics team member. In this case Kavya Vignesh so that she can pay for her expenses to Denmark

Aunts, Uncles, Friends and not the least Appa and Amma. I want to thank all of you for your overwhelming support in helping me make it to FLL Denmark. It is because of your efforts that I could raise enough funds to go to Denmark to represent India on the 23rd of May. I hope to win the competition and shall keep you updated on the same. I need to thank you not only for the funds but also in the press coverage you helped me receive in multiple newspapers. This will help put robotics more on the map in India as well!

Please take a few minutes to read the articles below.

Thank you once again.

Ahmed Faseeh
You're making India proud Kavya, All the best with your Project. Please wait...
Forgot your password?
INR 2,500
Special Thank you email
I will send you a special thank you email for your contribution
CLAIMED 2 Out Of 30
Delivery date: 06/2017
SELECT THIS REWARD

Please wait...
Forgot your password?
INR 5,000
Digital Thank you e card
I shall send you a special digital e card thanking you.
CLAIMED 1 Out Of 20
Delivery date: 06/2017
SELECT THIS REWARD

Please wait...
Forgot your password?
INR 10,000
Special painting designed by me for you
I shall design a special painting for you for your generous contribution
CLAIMED 0 Out Of 10
Delivery date: 06/2017
SELECT THIS REWARD