Copenhagen speculates on what might have transpired during a meeting between Nobel laureates Niels Bohr and Werner Heisenberg in Copenhagen in September 1941, at the height of the German advance into Russia and just three months before America’s entry into the war. The power of National Socialist Germany was at its pinnacle, and the Germans had just been made aware, through Swedish sources, of U.S. plans to build an atomic bomb.

The meeting was at Heisenberg’s behest. As Germany’s leading theoretical physicist and head of the German Uranium Club (the organ which would assess the possible war uses of nuclear energy) he was the man best suited to advise his government on the creation of an atomic bomb. The older Bohr was not only a professional colleague of Heisenberg, but a close personal friend as well. The play ponders the possible reasons for Heisenberg’s visit, linking them to the failure of the Germans to develop the bomb.

The show has had both critical & commercial success since it's inception in 2009. Copenhagen has completed 50 shows!

TO BE A PART OF THIS THRILLING DRAMA , CROWDFUND THIS CAMPAIGN. JUST FUND 250 ₹ & GET AN INVITE TO THE PLAY.

THE PLAY IN DETAIL

War is the greatest of dividers, but through its divisions it serves as the greatest vehicle for advancement. Advancements of science, technology, personal relationships, religion and the shape of the world. Michael Frayn’s Copenhagen, a play coming to us from the supremely talented Prakash Belawadi (directing it & playing Niels Bohr), is a fictionalised staging of an actual historical meeting between Niels Bohr, Werner Heisenberg and Bohr’s wife, Margrethe.

The play speculates what might have transpired in the meeting between the German, Heisenberg and the Danish, Niels and Margrethe Bohr. The meeting takes place at Heisenberg’s behest at the Bohr’s house in Denmark during the German occupation of the country at the height of World War II.

A scene from the play

Heisenberg’s trip to Copenhagen was a dangerous and embarrassing visit and ended in the apparent destruction of the relationship between the two men. The reasons Heisenberg journeyed to Denmark and what he wished to discuss with Bohr have vexed historians for many decades. Arguably, the issue of creating an atomic bomb could not have been avoided in their discussions.

Bohr’s house was wiretapped, so when Heisenberg appeared at Bohr’s doorstep, the two men took a walk so that no one could record their conversation. All that was publicly known was that after the meeting, Bohr would have nothing to do with Heisenberg.

The play does not provide a clear answer to the question of what took place during that meeting. It does, however, provide a lot of background information about these two powerful thinkers and the struggles they must have encountered in their attempt to honour their friendship during extremely turbulent, even life-threatening, circumstances. 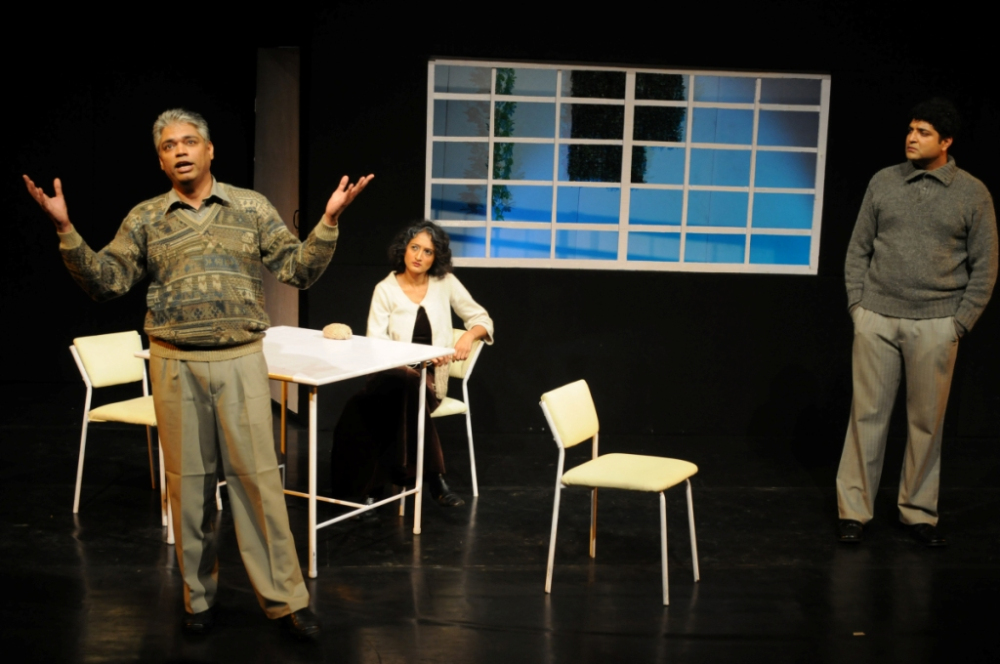 A scene from the play

Both scientists were capable of figuring out how to create an atomic bomb. Bohr would eventually help the U.S. forces and he was instrumental in the creation of the atomic bombs that were dropped on the Japanese cities of Hiroshima and Nagasaki.

But what happened to Heisenberg? Did he deliberately confound the Nazi efforts to create a similar weapon? Or did he attempt to create it but fail? Frayn leaves these overarching questions for the audience to ponder.

However, throughout his later life Heisenberg let stand the assumption made by some that he deliberately miscalculated the critical mass of uranium needed for atomic fission in order to prevent German development of an atomic weapon.

ABOUT "THE CENTRE FOR FILM AND DRAMA "

Co-founded by theatre, film and media personality, Prakash Belawadi, CFD was initially set up as an informal association of artistes in August 2004 at Sona Towers, Millers Road in Bengaluru, before it became a mandated part of the Suchitra Trust. As an integrated production and training centre for cinema, television and dramatic arts, CFD has trained students in film making and acting, organised screenings, seminars and discussions, produced content for cinema and TV, and staged several acclaimed productions in these 10 years.

DETAILS OF THE STAGING OF THE PLAY