Welcome to the post apocalyptic world through the eyes of Tawhid Zaman. Join us on this catastrophic yet eventful journey and we promise you won’t be bored.

The year is 2018. It has been 7 months since an apocalyptic event hit our planet. With no electricity and a scarcity of resources (food and water) people have perished in their own houses covered in layers of dust and buried memories.

"ZAMAN" begins with Tawhid, a survivor who has seen the world crumble. A widower traumatised by losing his wife to the catastrophe. Tawhid is threatening to take his life and that's when a mysterious radio broadcast from a small community calling themselves "THE FARM" plays. They claim to have resourced electricity and food. The film follows his quest to survive in a world devoid of normalcy that traces his transformation in the face of adversity. On this journey he encounters a 60 year old woman, her dog and a few other survivors who make for an eventful and thought provoking road drama, which all ends with a shocking twist.

Will they stay alive?  Is The Farm really all it claims to be?

"At the age of 12, I made my first movie using a webcam, from there on I developed my film making skills and understanding of the movie making  process, both at a practical and theoretical level." 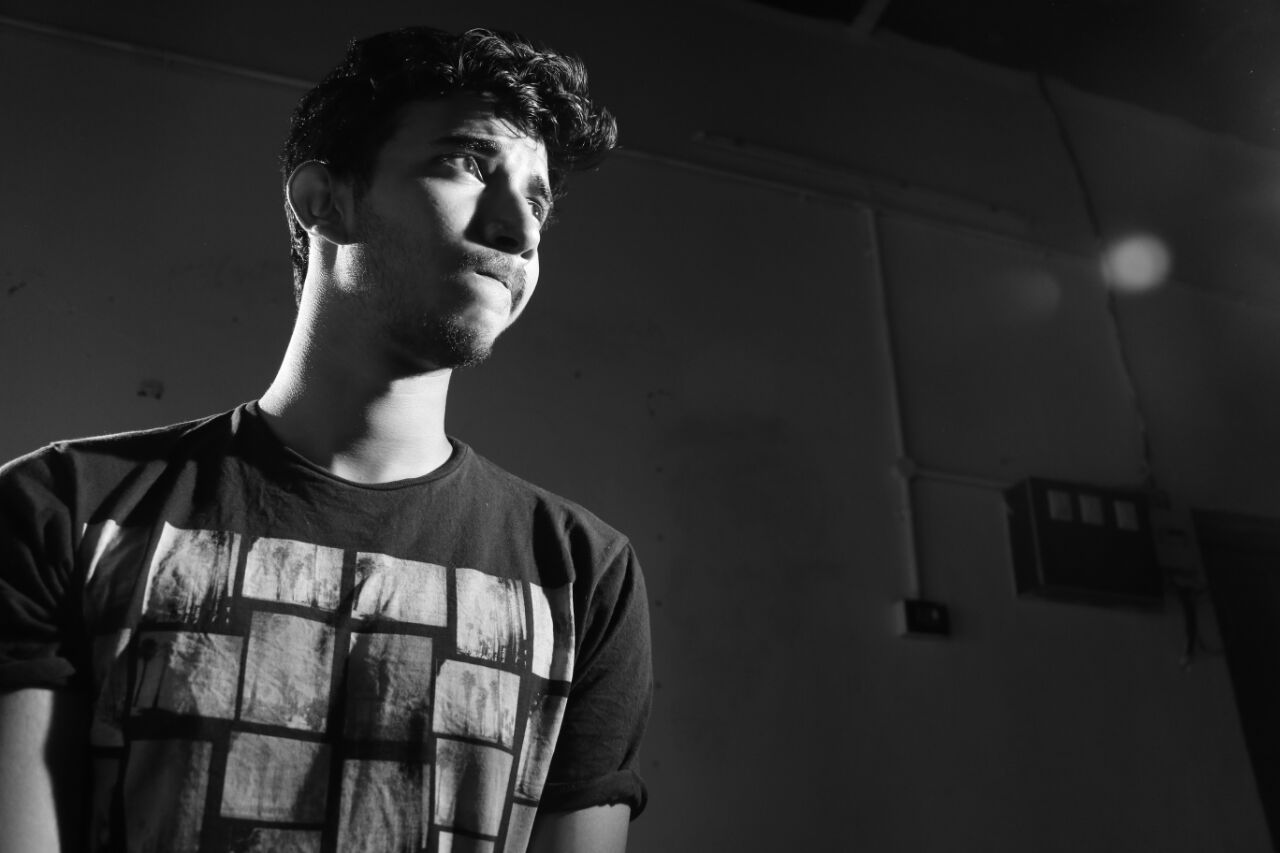 A student filmmaker, Athul is currently pursuing his Bachelors in Fine Arts at the Annapurna International School of Film & Media in Hyderabad. Originally from Kerala he has lived and studied in Chennai and Leeds, UK. He is 20 years old.

He has worked as a writer, director and editor for his own short films (9 films in 3 different languages) and has helped in the production of over 35 films that he has collaborated on.

"ZAMAN will be my first big short film. Both in terms of its vision and the scale. The premise itself is quite challenging and this is also what is very motivating to the filmmaker in me. "

Film-making is a costly process and we understand this. But as student filmmakers we have always figured out ways to get things done as cost-effective as possible. We work on shoestring budgets and sometimes on a zero budget.

Being a short film set in a  post-apocalyptic terrain, Zaman requires us to be well - financed. A crew of about 30 people  will work on this project on a Pro-Bono basis (i.e. They are not charging for their services).Friends and family are supporting us by giving us free access to shoot  on locations they own .All this is helping us keep the costs in check. 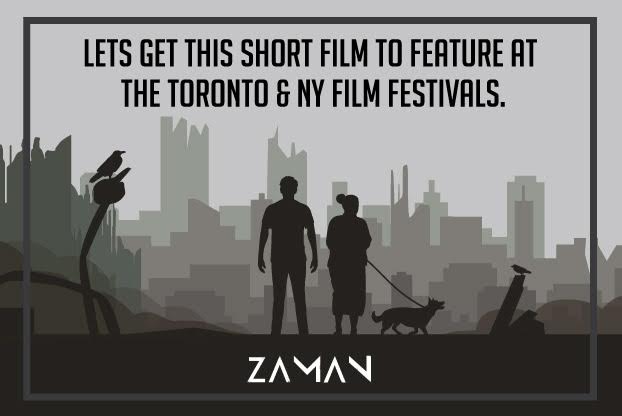 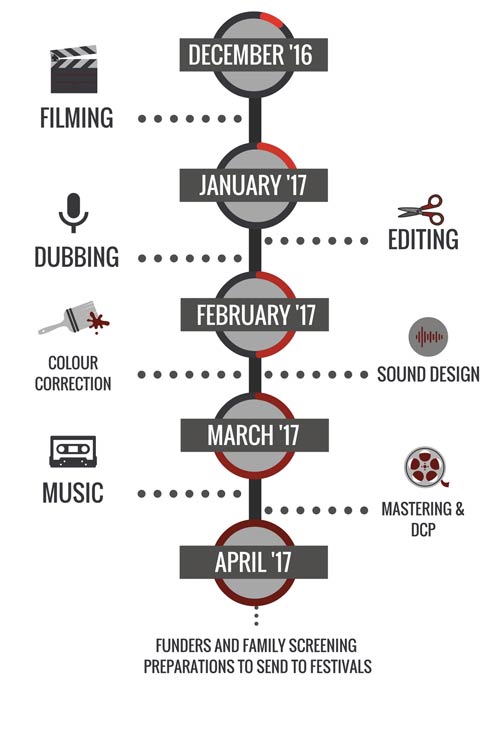 We believe that good music adds largely to the essence of the movie and we aim to hit that nerve with our selection of: Norwegian artist Moddi's song "Stuck in the Waltz”

The artists mentioned are independent performers in their field of expertise and have been gracious by allowing us to use their content for ZAMAN. 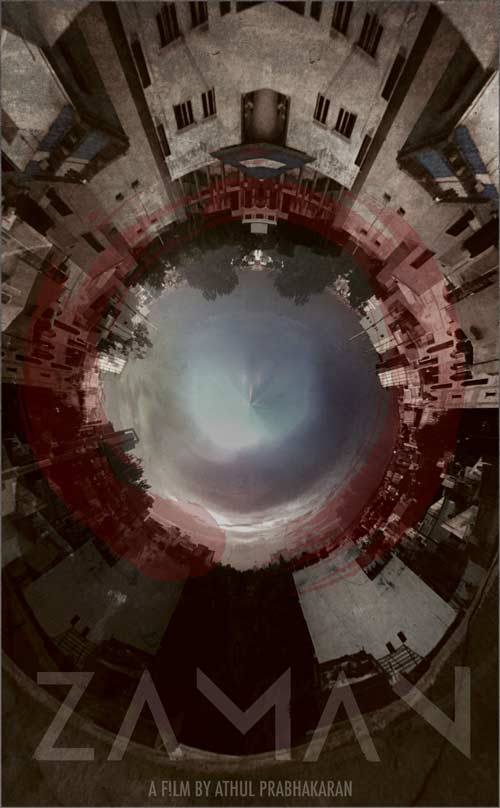 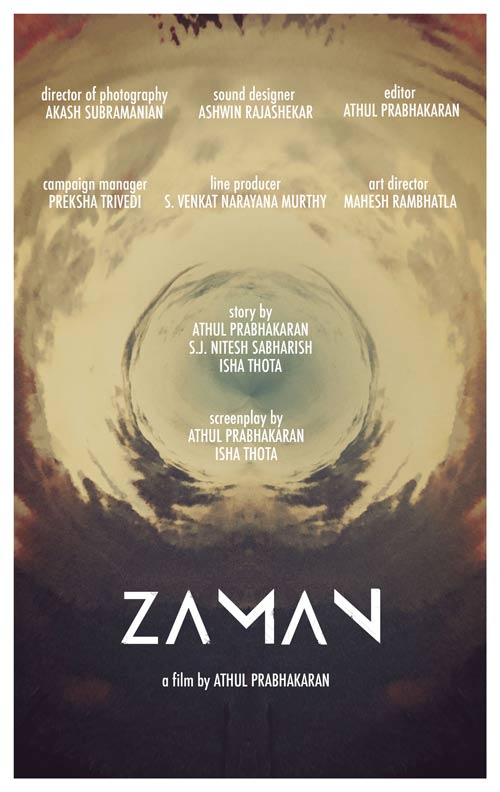 The risk of overshooting on budgets and timelines is the biggest challenge.

We understand this problem. Before ZAMAN was in the crowdfunding stage, It was in the pre-production process .With an experienced crew we created a detailed schedule and a plan that will help us be on track.

Each day has been micro-managed to "specific time slots"for each shot.Alternate "indoor" options  for bad weather & rainy days have also been identified .

But then again. We will battle Murphy's law. This is why we have budgeted a small amount of money for contingencies.

The final film will be out in April 2017 . Those of you who fund us, the cast, crew and their families will get to watch the film at a private cinema screening. For the general public, the film will be released only after the festival circuit - roughly April 2018

What if the campaign is not successful?

Fueladream will return the money invested back to the Funders as this is a "all or nothing" campaign. We opted for this mainly because a project this scale cannot be filmed with anything less than the funding target mentioned.  Also this will drastically add to the quality of the film and the story.

Zaman  is a English language short film rooted and set in India. 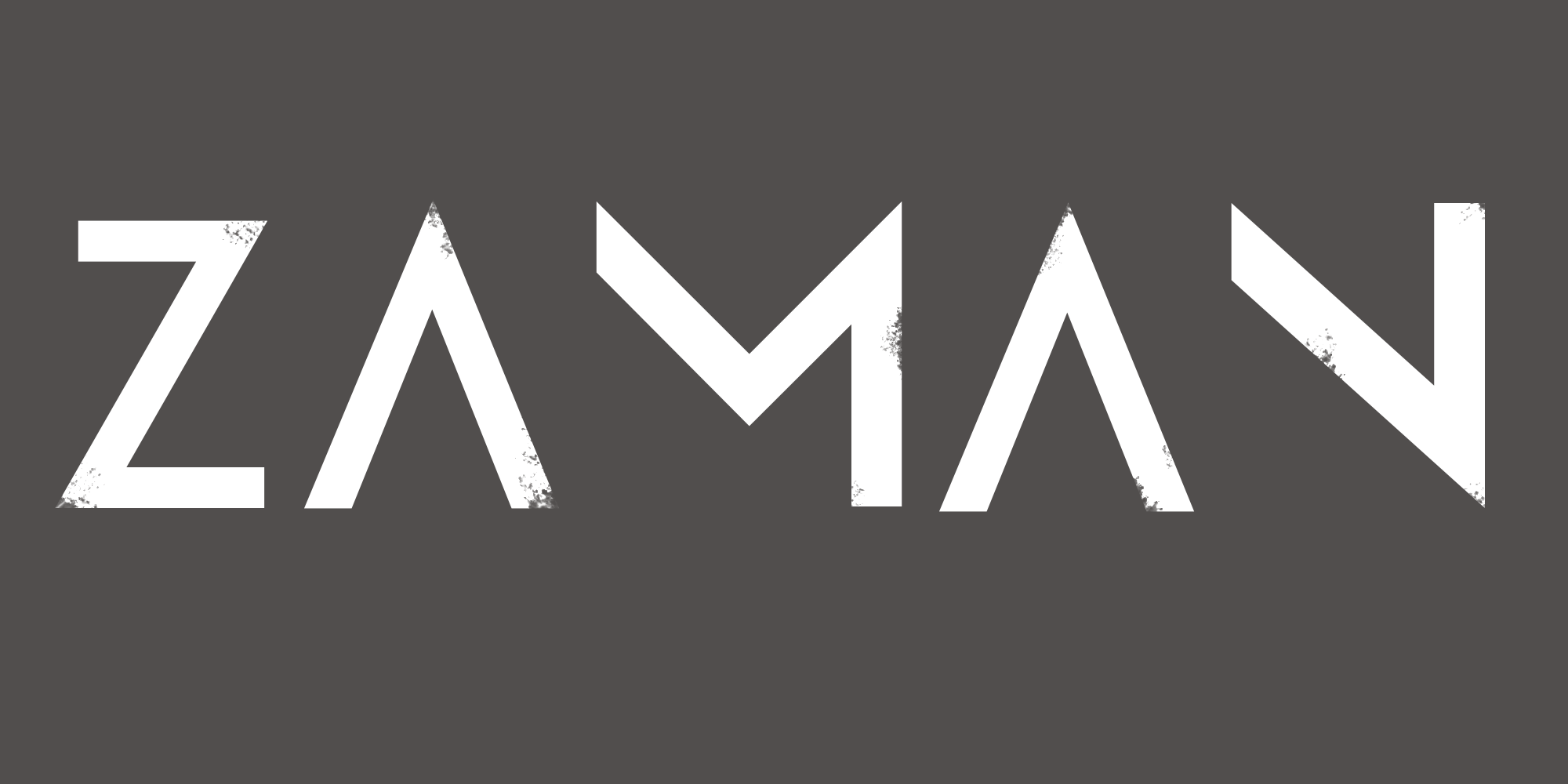 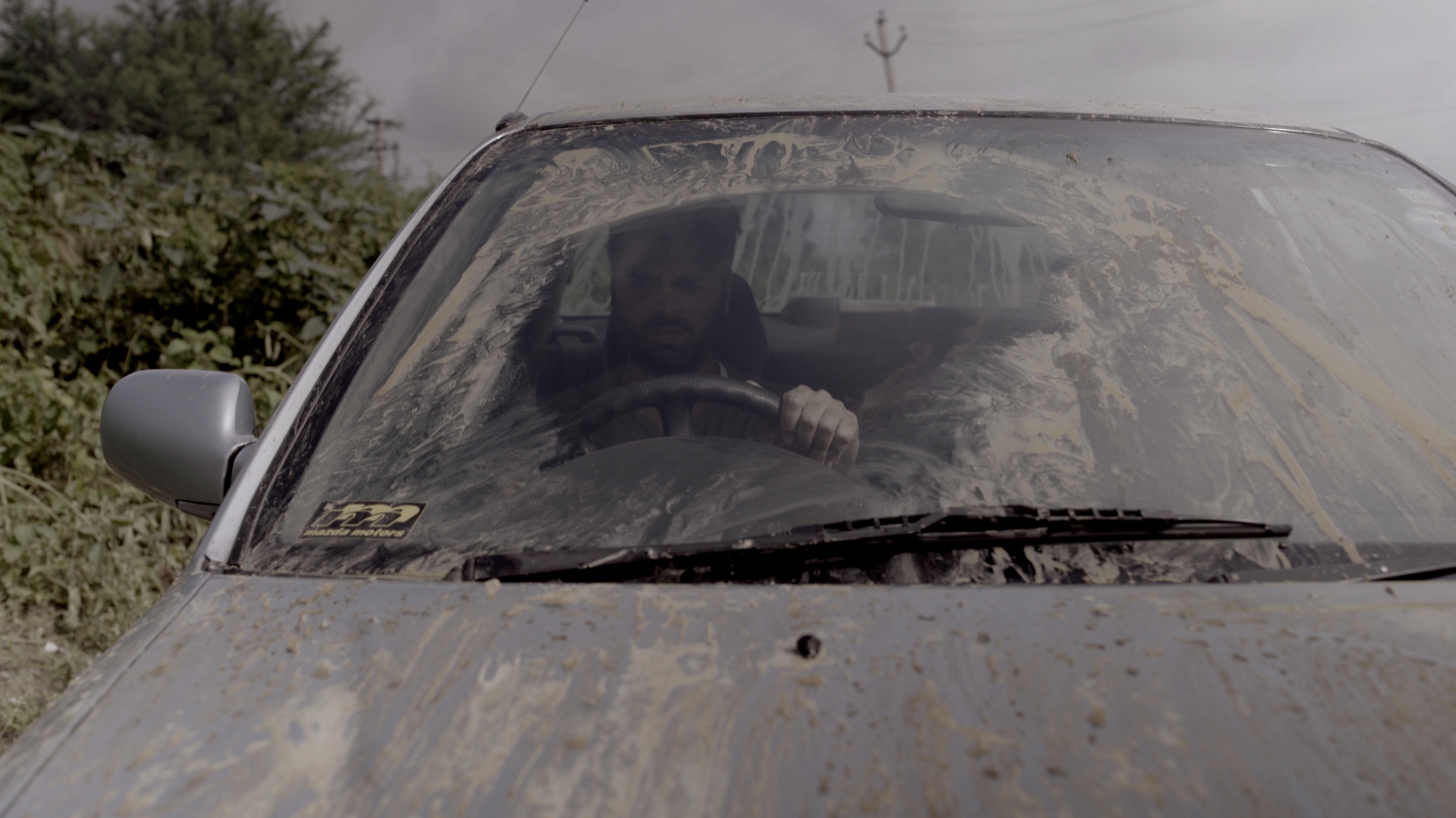 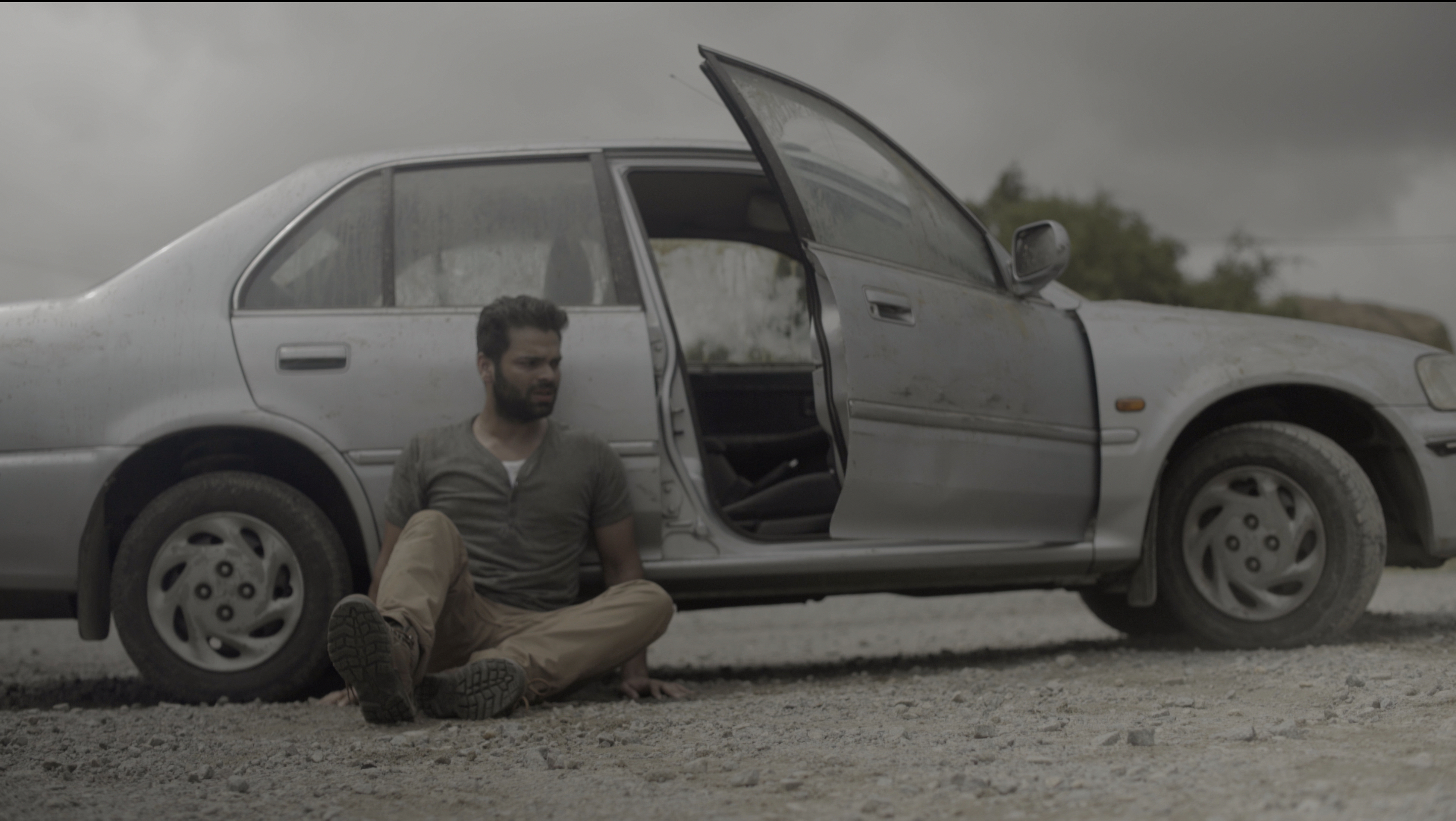 
Thank you, for all the patience.

Thanks for holding on guys, The short film is not a short film anymore! The Film's runtime is a little over an hour and it has shaped up really well. We are just about to head into sound post production and music. For now, the expected release date is in the month of JUNE. Till then, for being incredibly patient with us, We will send in to you a bunch of goodies every two weeks. This includes TRAILERS, POSTERS and MAYBE EVEN A SNEAK PEAK into one of the scenes.

Today's goodie is a screenshot from the project and our first character poster:


The first week and a few days have been up. Production wise, the film is going according to schedule with a few extra scenes filmed that were kept for later. We shot at some beautiful locations and its been a blast to see they were captured on camera. It's fair to say that the apocalypse hasn't been entirely kind to us. The tightly packed schedules are mentally and physically tiring, but with a crew who is equally pumped to endure this, our production has still been pretty successful. Here's where you can view our BTS for the first week:

We begin filming on the 20th of December in and around Hyderabad till the 7th of January with breaks on 25th of December and the 31st and the 1st of January. Updates will be on a schedule wise basis and we will try and keep you posted on everything that is happening.

Other than scheduling, actor rehearsals and key-crew script reads, we have been figuring out our food and transport and equipment from rental companies. 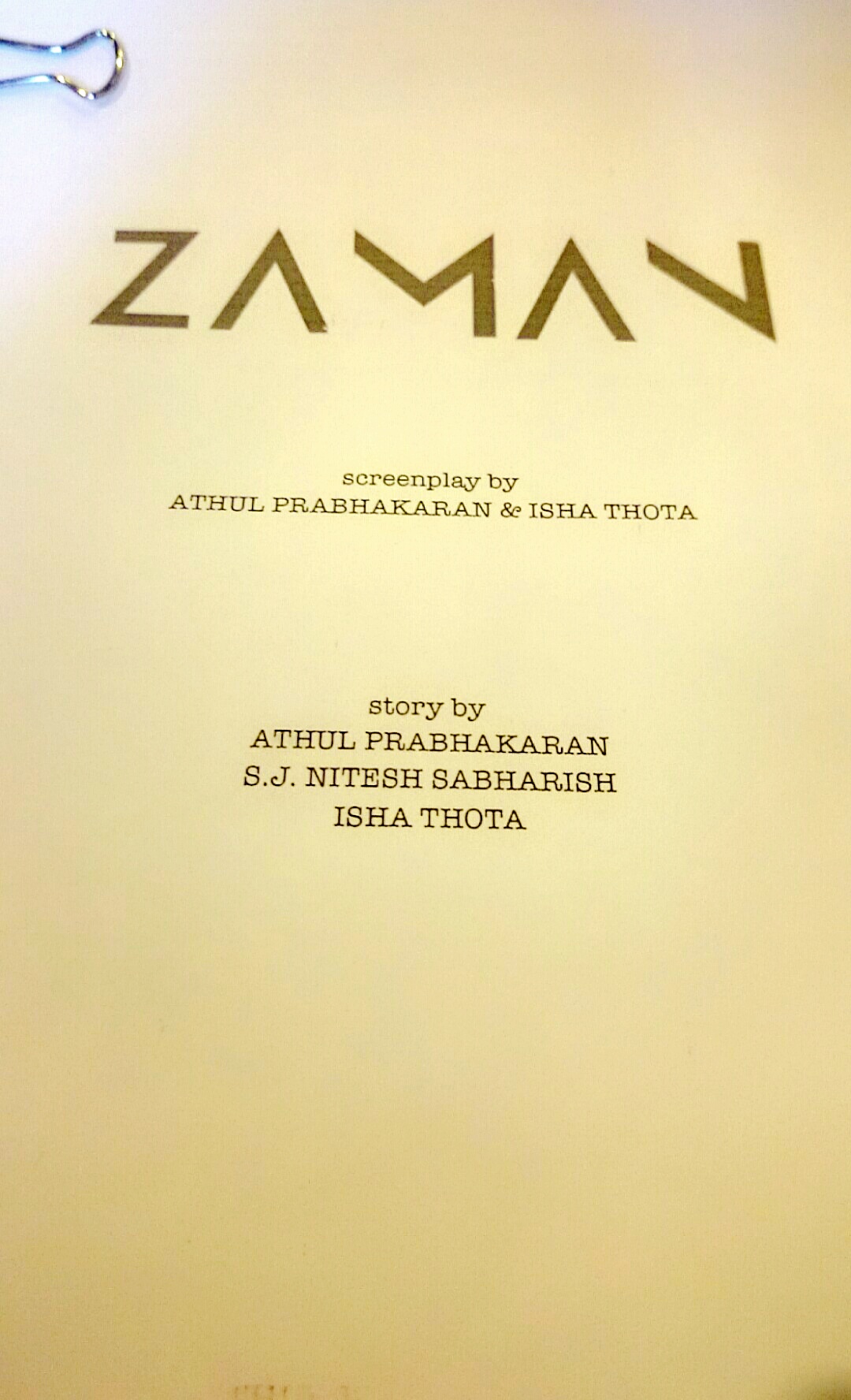 INR 500
WALL-E
To thank you for your contribution to ZAMAN, We'd like to give you a shout-out on our Facebook page and a thank you on your wall!
CLAIMED 4 Out Of 500
Delivery date: 11/2016
SELECT THIS REWARD

Please wait...
Forgot your password?
INR 1,000
DELICATESSEN
Welcome to the apocalypse and thank you for helping us! You deserve: *REWARD: WALL-E & *A Facebook banner - I supported Zaman. You will also be one of the first people to see the trailer of the film.
CLAIMED 4 Out Of 500
Delivery date: 04/2017
SELECT THIS REWARD

Please wait...
Forgot your password?
INR 2,500
THE BOOK OF ELI
Thank you for supporting our production. You deserve: *REWARD: DELICATESSAN * A Thank you video & * Access to first and last day of the BTS documentary
CLAIMED 2 Out Of 500
Delivery date: 04/2017
SELECT THIS REWARD

Please wait...
Forgot your password?
INR 5,000
CHILDREN OF MEN
For supporting us, you deserve a *Customized Thank you video *Access to the first and last day's behind the Scenes documentary & * Director's Booklet - Notes from the director on thought, developement and implementation; Challenges on shooting a post apocalyptic film
CLAIMED 1 Out Of 100
Delivery date: 04/2017
SELECT THIS REWARD

Please wait...
Forgot your password?
INR 10,000
MAD MAX
This is incredible, thanks for supporting us. In helping us shoot Zaman, you have earned yourself: * Reward: CHILDREN OF MEN * 3 Tickets to the Premiere (in HYDERABAD) *Original Score from the film & *Access to the Full Day-wise documentary on the film-making. (notes: Transportation to the screening not included)
CLAIMED 2 Out Of 50
Delivery date: 04/2017
SELECT THIS REWARD

Please wait...
Forgot your password?
INR 25,000
THE ROVER
Thank you so much for funding Zaman, you deserve: *An opportunity to be on set (if you’re in Hyderabad) / A one day on-set tour with interviews from cast and crew * A Credit under the THIS FILM WOULDN'T HAVE BEEN POSSIBLE WITHOUT section at the end of the film *The Screenplay of Zaman written by Athul and Isha & * Reward: MAD MAX
CLAIMED 2 Out Of 15
Delivery date: 12/2016
SELECT THIS REWARD

Please wait...
Forgot your password?
INR 50,000
SNOWPIERCER
As an Executive Producer, we'd like to welcome you on board with: * An Executive Producer Credit * A Skype call with the Crew * An Online copy of the film in 1080p & * REWARD: THE ROVER
CLAIMED 2 Out Of 10
Delivery date: 04/2017
SELECT THIS REWARD

Please wait...
Forgot your password?
INR 1,00,000
I AM LEGEND
Thank you for your contribution. You will be our producer and you deserve everything. * A Producer Credit in the opening titles * A Production PDF with Character Sketches, Early Structures, Ideas, Storyboard and Budgeting sheets *An Online Copy of the film in 4K & * REWARD: SNOWPIERCER (minus the credits from each reward)
CLAIMED 1 Out Of 4
Delivery date: 04/2017
SELECT THIS REWARD