On one of my recent trips, I took an ordinary taxi from outside the bustling Dadar station. Little did I know that this ordinary taxi would leave an extraordinary impression on me. Facing a slow crawl through typical Mumbai traffic, I got chatting with my taxi driver to pass time.

Suddenly in the middle of the conversation, he asked me…’Sahab IIT accha hai kya?’ I asked him why did he ask. He said that his son is good in studies and wasn’t sure what he should do.

This reminded me of my younger days and the indecision I went through before I got encouragement and direction from well wishers.

I found out more and even called his son and made some enquiries.  Here is their story. 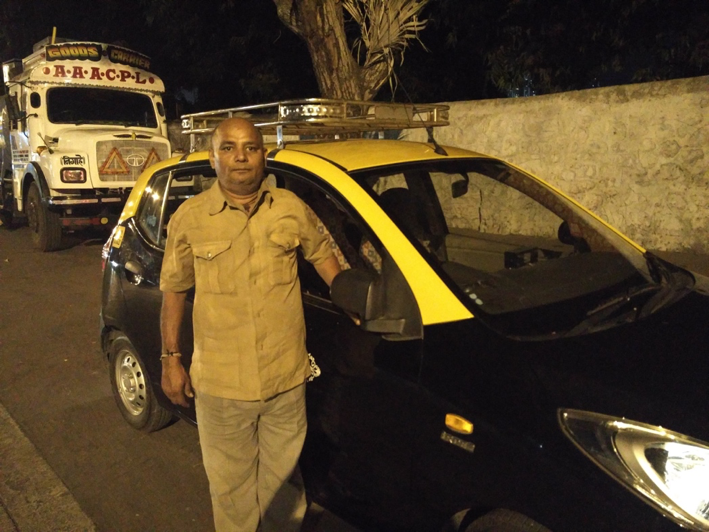 52-year-old Yogeshwar Mishra is the eldest of 7 children. Born to a farmer from a small village called Karampur near Varanasi, he came to Mumbai in 1988 and is driving a taxi since then. He has been responsible for settling his six younger brothers and sisters. Post which he married and had 5 children...3 girls and 2 boys. While he stays at a petrol pump at Mahalaxmi in Mumbai, his family is back in Varanasi. His eldest two daughters are married. His other children are 17, 16 and 7 years old, respectively.

An unfortunate incident happened last year. He was hit by a BEST bus and suffered a brain injury. He was in a coma for 6 weeks. After resting and recovering for 6 months he is back on his feet driving the taxi for 12 hours a day, earning a livelihood (Rs.15-20 k per month) for his family.

I called his son, Shubham Mishra and asked him why does he want to do his engineering from IIT.

Shubham is a dreamer…

He wants to drive poverty away from his family.

He wants to serve his parents for what they have done for him and his family.

He wants to be in a position to help others.

He aspires to join an IIT to study computer science.

He is confident that if he goes to the classes he will be able to clear the IIT-JEE.

The classes for IIT preparation would cost over Rs.1 lakh at Varanasi and of course much more in Kota. After the mishap that his father went through last year the family is going through a finance crunch. And Shubham was slowly losing his hope of being an engineer.

At that point I thought we need to give the boy a chance at life just like most of us have received from time to time. Technology offered crowd funding as a vehicle for meeting his dream.

I immediately contacted JBS Tutorials which is a popular IIT Coaching centre in Varanasi. I spoke to their Director Mr. BP Singh, an IIT engineer himself. He was supportive of the idea and agreed to lower the classes fees to the extent possible. Before we decide to support Shubham he took an aptitude and attitude test. These are his words…“Mishra belongs to very remote and rural area where people measure life with coffee spoons. We have tested his mental ability and seen that he is highly interested in education and deserving candidate for IIT-JEE. For such young, driven people, help is required.”

The above picture is the latest mark sheet of Shubham.  Some might say the grades are not all that great.

My only response to it is that ...neither were mine till I decided IIMs it is. I was a 60% commerce grad from Mumbai. And most people dissuaded me from gunning for the IIMs until Prof Kale from IMS classes asked me a simple question...” What do you want to do?....then go get it”

I see the passion in him and that is what matters. Like they say – “when the dream is strong, the facts don't count.”

I am very delighted to inform you that Shubham has cleared his IIT Mains Entrance Examination. He will now appear for IIT Advanced in June.

It feels great that we believed in him. And thank you guys for your support in this cause.

We can definitely do more. I will initiate something more very soon. I am counting on your ideas and contributions again.

Thank you for your valuable support on the 'Fuel an IIT Dream' campaign.

I am in constant touch with the student Shubham Mishra and the IIT Entrance classes at Varanasi. He has now completed the resident tutorial course. He is appearing for the Twelfth Standard boards right now and will be appearing for the IIT Entrance examinations on 8th April. I am sure he will do well. And set an example for many others around him. "Your good wishes and prayers would also help."

This incident has made me aware of the need for such coaching support for deserving students for their aspirations for IIT and other such higher studies. We have started the conversation with reputed coaching centres and working out a process which makes it very transparent. Hopefully this will lead to many others like us to contribute to the pool.

Your ideas and suggestions on this will be very helpful.

Thank you once again for joining in the cause. INR 5,000
A personal call from Shubham
Shubham will call and thank those people who contributed above Rs.5000. He will also send a personal email to everyone who contributes.
CLAIMED 1 Out Of 20
Delivery date: 06/2016
SELECT THIS REWARD