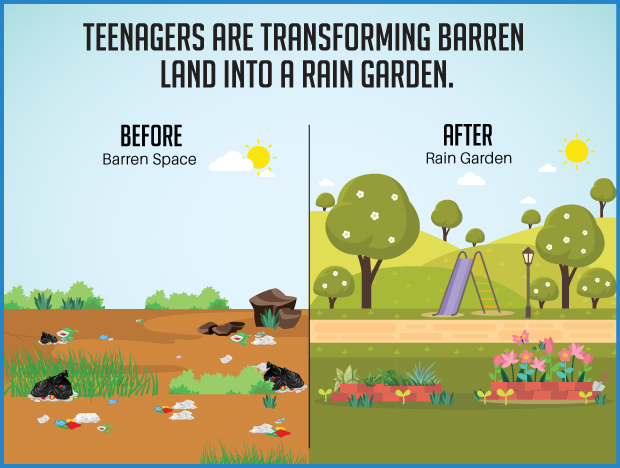 WE NEED YOUR HELP TO CREATE A ONE-OF-A-KIND RAIN GARDEN FOR RESIDENTS OF DWARKA IN DELHI. READ OUR STORY AND FUND GENEROUSLY.

We are students of The Shri Ram School, Moulsari, Gurugram. Our names are Taira Bhargava and Tia Bhalla. Our primary aim is to combat the growing water scarcity in New Delhi and to make it water positive. Inspired by the ancestral Indian and International techniques of recharging groundwater, we propose to convert barren land into rain gardens by constructing bioswales and trenches for rainwater harvesting.

Our very first project is planned in Sagarpur West in Dwarka, New Delhi. We propose to develop a sustainable public park with rainwater harvesting facilities of bioswales and trenches, hoping that in time the community will benefit from both the rising water tables along with the health and environmental benefits accruing from developing a green lung.

THIS IS HOW THE PLACE LOOKS AT PRESENT 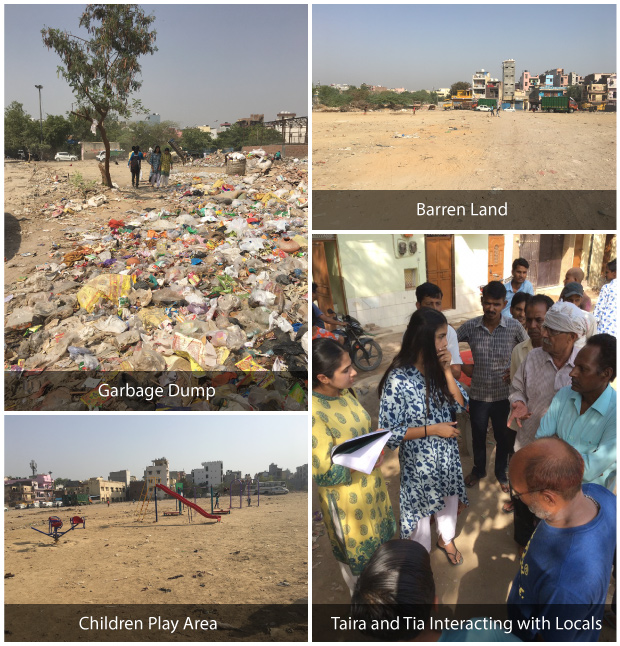 ARCHITECT'S IMPRESSION OF HOW THE PLACE WOULD LOOK AFTER TRANSFORMATION 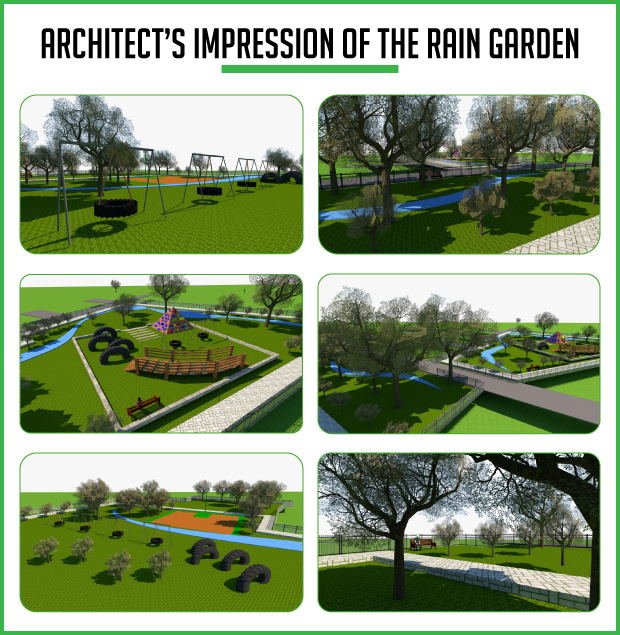 THE ACTUAL PLAN OF THE RAIN GARDEN 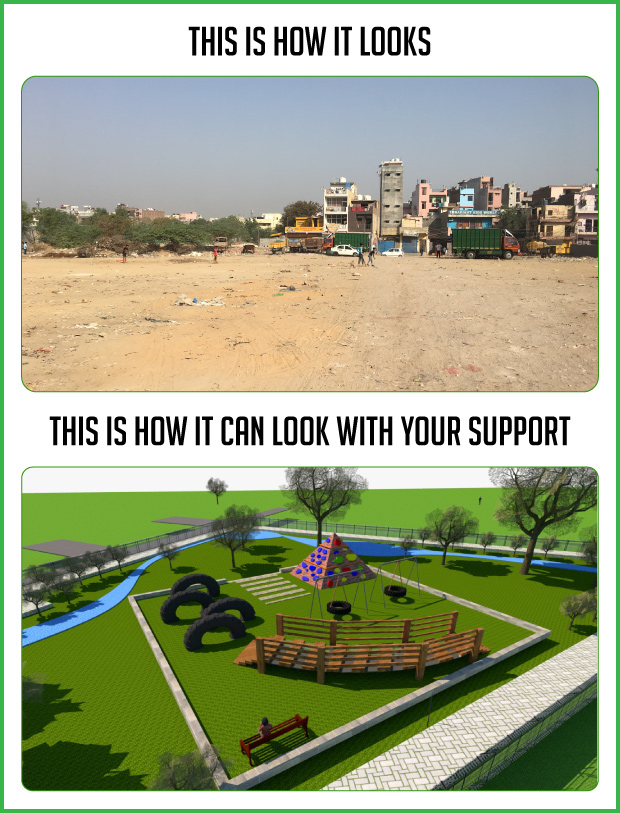 The funds will be used to convert the adjoining barren grounds to rain gardens. It measures approximately 2 acres. The park will be developed and used for multi-purpose functions of rainwater harvesting, recreational space and as a much needed green lung for the community. We hope that this project will help in creating a sustainable community by making them water positive in time with the park recharging groundwater below and the green lung above abate pollution and climate change. We also plan to create a recreational corner for children made from recycled goods.

India has about 4% of the world’s freshwater resources and accounts for ¼ of the world’s groundwater, ranking it among the top ten water-rich countries. Despite this, India has designated a water-stressed region.

According to a 2018 report by the Government-run think tank Niti Aayog, a total of 20 cities including New Delhi, Bengaluru and Chennai are poised to run out of groundwater, affecting 100 million people. This may be a wider glimpse of India's future as the water crisis spreads. As water runs out, the country may have to confront a series of associated problems: food insecurity, vulnerability during heat waves, diseases due to deteriorating sanitation and regional conflicts over water access.

Delhi and the NCR at present are no exception with almost all zones being exploited. Moreover, a recent newspaper article in March 2019 corroborated Delhi’s water woes. The headlines stated that there were only 1200 rainwater harvesting units in a city of 2 crores. In the absence of any corrective and conservation measures undertaken by the city, the looming threat of a severe water crisis does not seem to be a distant reality.

We aim to raise INR 5,60,000 through this crowdfunding campaign.

ABOUT US & THIS CAMPAIGN 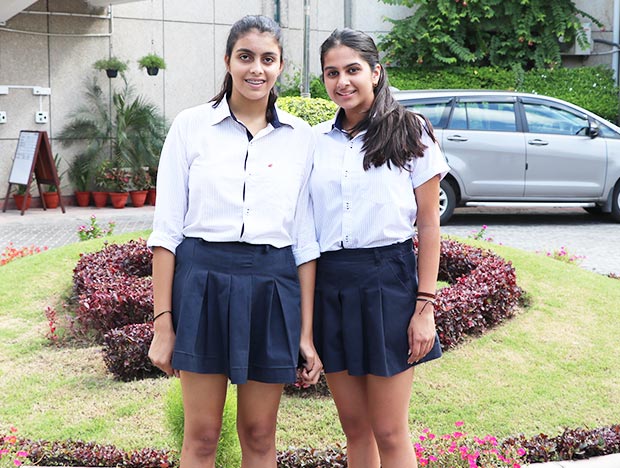 We, Taira and Tia, are from the Shri Ram School, Moulsari. We are in grades 11 and 9 respectively. In the course of the summer, we were quite alarmed to hear of the growing water scarcity in all parts of India. There were continuous news reports on almost every national and international television channel about the spreading water crisis. A report by Niti Aayog, a government-run think tank, confounded our worst fears; Delhi, too, would run out of groundwater by 2020. We no longer could sit on the sidelines watching our home city fall to this plight. Both of us, thus, took up this mission on a war footing. Our long-term aim is to make our city water positive and sustainable. We begin our initiative by working with the water-stressed Sagarpur area of Dwarka to push up its water tables. 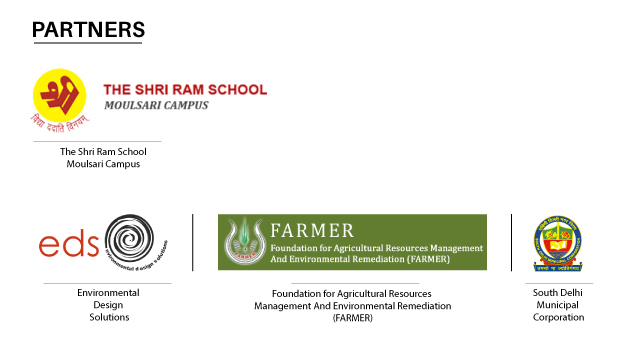 The FARMER - Foundation For Agriculture Resources Management and Environmental Remediation, NGO is established in 2002 is working at a national level for the welfare of mainly farmers, rural youths, women and for overall sustainable rural development in the field of agriculture and allied industries. Nowadays the activities of FARMER are mainly focused on western UP through the training programs related to Integrated Pest Management (IPM), Organic Cultivation, Quality Control of Agri Inputs and Soil and Pesticide Contamination in Agri-food produce.

Our design partner is Environmental Design Solutions and this project has also been approved by South Delhi Municipal Corporation. FARMER is our mentor and guiding light in this project. According to a 2018 report by the government-run think tank Niti Aayog, a total of 20 cities including New Delhi, Bengaluru and Chennai are poised to run out of groundwater affecting 100 million people. This may be a glimpse of India's future as the water crisis spreads. As water runs out, the country may have to confront a series of associated problems: food insecurity, vulnerability during heat waves, diseases due to deteriorating sanitation and regional conflicts over water access.

We are a team of two students from the Shri Ram School, Moulsari, but seem to be growing. We have collaborated with the NGO, FARMER who is mentoring us from the identification of the water-stressed locality to the implementation of our project. Recently, we have 7 volunteers from a green architectural firm, Environmental Design Solutions, who have committed to participate in our efforts to make Delhi water positive. The RWA of Shivpuri, Sagarpur West in Dwarka have been very supportive and 40 residents have volunteered to give us full support in creating and maintaining the health and well being of the proposed green lung.

See the visual depiction below.

Will we get to know the details of who benefited?

Yes. After the money has been collected it will be transferred by Fueladream to the NGO. It will take from 1 to 2 years after that to get details of fund use. Once we get this information from them, we shall upload this on the UPDATES section of this campaign. You will then get an alert & can read details about the beneficiaries.

It’s a concept that allows a large number of funders (like you) to fund an idea or a cause or event by giving small amounts of money online. Fueladream.com is a crowdfunding platform in India that allows for such pooling of funds. You can fund innovations & ideas on FuelADream and be the first to get these products or make them come true. You can also do a good turn by funding charities and causes through crowdfunding. When you fund a charity it’s more like a donation & you get small innovative rewards like a shout-out on an FB page or a thank you email from the beneficiaries Please wait...
Forgot your password?
INR 10,000
A Facebook shoutout.
Thank you for your contribution. You will receive a Facebook shoutout as a gratitude.
CLAIMED 3 Out Of 15
Delivery date: 10/2019
SELECT THIS REWARD

Please wait...
Forgot your password?
INR 25,000
Thank you phone call.
Thank you for your contribution. You will receive a 'Thank you' phone call from me.
CLAIMED 0 Out Of 10
Delivery date: 10/2019
SELECT THIS REWARD

Please wait...
Forgot your password?
INR 1,00,000
Thank you phone call.All of the above (Thank you on Whatsapp, FB & a Phone call).
As a funder so huge, you will receive all the above rewards - a 'Thank You' message on Whatsapp, FB and a personal phone call from me.
CLAIMED 0 Out Of 5
Delivery date: 10/2019
SELECT THIS REWARD